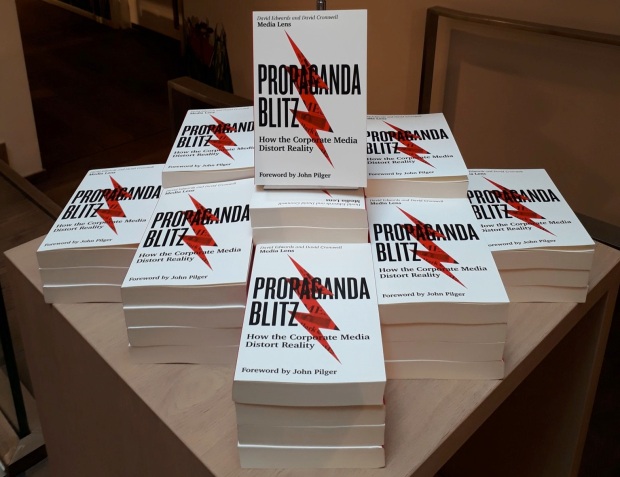 The UK’s corporate media outlets have so far declined to publish a review of Propaganda Blitz by David Edwards and David Cromwell.

While the headline here may be deliberately satirical in style, the faux-irony in its message belies a deadly serious dimension.

Of course not every published book gets a high-profile review, but the omission of this particular one smacks of more than simple oversight.

For one thing the professionalism and credibility of the authors, David Edwards and David Cromwell, are hardly in question: they have a strong pedigree as researchers and authors of numerous other books and are also the co-editors of the now 18-year longstanding campaigning group Media Lens, which receives accolades from the likes of Noam Chomsky and John Pilger, is independently financed by hundreds of individual supporters, and has tens of thousands of followers on Twitter.

For another, Propaganda Blitz is no ordinary book. It is no exaggeration to say it has the potential to change the way most of us view the world in which we live.

In Propaganda Blitz, Edwards and Cromwell draw on their years of experience to deliver meticulous media analysis, flawless logic and eloquent exposition to draw startling, even mind-bending conclusions that would and should be of wide public interest. The book exposes how the media — liberal media in particular — hoodwink us into giving tacit and unthinking support to morally reprehensible policies and actions that are routinely pursued behind the scenes by our government, armed forces, and allied corporations.

Herein lie both the likely explanation for the review editors’ oversight and also, in a depressing twist, a demonstration, however unwitting, of one of the primary media tactics — as evidenced in the book — for controlling public opinion, which is to omit inconvenient evidence (in other words, evidence that throws into question the validity of an approved narrative or, even worse, of its narrators).

Media outlets coming under the spotlight in Propaganda Blitz include the Guardian and the BBC in the UK, both of which are still trusted by many progressive-minded people to challenge power, maintain objectivity, and investigate and report in the public interest. (The BBC is required do this by its remit as a public service broadcaster.) However Propaganda Blitz reveals that, on the contrary, these and other media institutions fix limits on acceptable opinion (currently with a special focus on the left-hand end of it) and use justifications based on falsehoods, cherry-picked data or implicit assumptions to cover for harmful, often criminal actions of the rich and powerful.

Chapters entitled “Yemen: Feeding the Famine,” “Libya: It is All About Oil” and “Israel and Palestine: ‘We Wait in Fear for the Phone Call from the Israelis,'” detail how egregious foreign policy decisions, actions or inaction on the part of the UK government and its NATO allies — which resulted in or failed to prevent the bombing, maiming and killing of hundreds of thousands of people and the destruction of communities, families, livelihoods and critical infrastructure of entire countries, with associated unimaginable, horrific suffering — were portrayed just as these powers preferred; for example, as “humanitarian interventions” based on concepts like “Responsibility to Protect” (as in the case of Libya).

Clear and brilliant chapters detailing the process of reputation assassination of figures on the “enemy” side (for which read, not acquiescent to Western powers), or of people presenting a challenge to the established neoliberal narrative, including Jeremy Corbyn, Hugo Chavez or Russell Brand, expose how deftly and ruthlessly the corporate media twist public opinion by means of fabrications and false associations.

At politically febrile times, corruptions of public opinion such as those above are administered by means of a coordinated sequence of news outputs designed to reinforce the approved narrative for all readers and viewers, wherever they tune in, for the critical period. In the book’s signature chapter, “Anatomy of a Propaganda Blitz” Cromwell and Edwards dissect the nature of these fast-moving, devious and manipulative campaigns and how they are deliberately designed to garner public support for unsavoury actions that further elite interests.

Once you’ve read this chapter, you’ll never miss a propaganda blitz again — and you’ll slap your forehead at how many you’ve been duped by already.

There is much more to commend this impressive, passionate, essential and consistently eye-opening book; too much to do justice to in a few short paragraphs. The chapter on climate change and mass extinction deserves a special final mention, however, for its devastating summary of the ultimate media crime of knowledge suppression.

That a global, fossil-industry funded, climate-science denial network of nefarious groups and institutions could, for decades, succeed in perverting and subverting awareness of the greatest existential threat in the history of humanity — and its root causes — is thanks largely to the complicity of state-corporate media. Time and again they shied away from challenging the lies and equivocations put out by this network and instead promoted its half-truths and platitudes. In so doing, explains Propaganda Blitz, they actively obstructed the awareness needed for mobilisation behind the required socio-economic transformation.

“In short,” concludes this chapter, “the current era of ‘great derangement’ will last as long as the public allows news and debate to be manipulated by a state-corporate media system that is complicit in killing the planet.” The crime sheet doesn’t get more serious than that.

“Truth-telling journalism” refuses to tell the truth about journalism

If the mainstream media were working independently, fearlessly and in the interests of the wider public (or even of simply growing their market share), such revelations as these would attract full-spectrum public exposure; not just reviews in print but also in-depth broadcast interviews, challenges to media executives on live television and explosive investigative documentaries detailing the deleterious and corrupting effects of biased establishment media on democracy and our future.

But, as Propaganda Blitz sets out so clearly, such media are driven by more insidious forces; self-reflection in the name of integrity and public interest is a long way down their priority list. The loss of opportunity here is indescribably huge. If Propaganda Blitz were afforded a level of publicity befitting of its meticulously researched and scandalous revelations, it could rock some significant boats indeed; and open the doors for significant and positive change in all our interests. Learning to spot and reject the ways in which the media disguise, suppress and obfuscate the truth, and instead form our own opinions about the behind-the-scenes actions of those with power and money, is a first and critically important step towards mutual self-liberation.

But the absent response from the press is no more or less than a predictable outcome, itself demonstrating an argument of the book. And all is not (quite) lost. Propaganda Blitz finishes, perhaps unexpectedly, on a note of positivity, highlighting the growing plethora of independent alternatives to state-corporate media institutions, which do not depend on dirty money, and which between them are enabling the word of truth to spread faster than ever. Long may they prevail. And meanwhile, if any of the big-gun media outfits wants to prove me wrong and publish this, or any other review of Propaganda Blitz, please feel free. The authors will, I’m sure, welcome all enquiries.

All text on VIVID is ©Vanessa Spedding but may be freely distributed in its original form for non-commercial purposes only, as long as attribution to VIVID and a link back to itsvivid.wordpress.com is included (or it is forwarded as the email newsletter). For other uses please contact vividworld {at} rocketmail.com. Note that pictures may have different copyright restrictions and should not be duplicated.
Loading Comments...
%d bloggers like this: